My God Daughter's christening is tomorrow, and my mother instructed me to buy her something that "she will have forever".  Well, whatever I got for my Christening (a silver spoon?  a rattle?) is long gone.  So what kind of gift will you really have forever?  Answer:  A book.

This led me to a book shop where I bought a hard-backed copy of "The Little Prince", and promptly started spazzing-out with the shop assistant about what an incredibly, amazing work of literature it is.
I like it just a little bit!

It's ostensibly a children's book, and for a child it's a great read.  But when I picked it up again as a teenager, I realised what a rare gem it is.

It tells the story of a man who, stranded in the desert, meets a strange little boy.  This little Prince has left his home planet to explore the universe.  Through his adventures, and his innocence, the book makes touching observations about life and human nature. 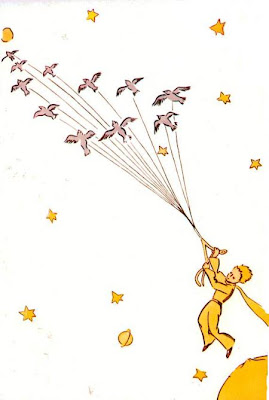 For me, the most potent moments in the book are the relationship he develops with the little fox that begs to be tamed ("You become responsible, forever, for what you have tamed"), and his departure from the planet, which leaves the narrator and reader in a state of ambiguity about life and the after-life. 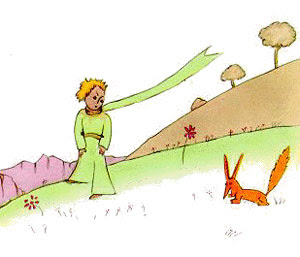 Originally written in French by the writer Antoine de Saint-Exupery (who did many of the illustrations), it's less than 100 pages long, and it's just beautiful.  Read it here.

A graphic novel has just been brought out.  For me it's sacrilegious, but out of interest...

And if you're lazy, you can always watch the cartoon ;)

Posted by Yolanda Barker at 3:13 PM

I LOVE the Little Prince. Hadn't heard about the graphic novel, will definitely check it out.

Ellen at The Raven and the Cellar Door

I have copies in Polish and French and I have seen a Lithuanian play of The Little Prince in Vilnius. It is a powerful tale.

Regarding why the world is in such a mess, the apostle John wrote, 2000 years ago, in Revelation 12:9: 'So down the great dragon was hurled, the original serpent, the one called Devil and Satan, who is misleading the entire inhabited earth; he was hurled down to the earth, and his angels were hurled down with him.'

If, as John suggested in that book of his, God is not currently the ruler of the world but Satan is, misleading, dividing and manipulating people like puppets on rods so that in the end they haven't got a clue anymore where they are going and may even scoff at the idea of his existence, then too, there is no reason why he might not use all means available such as religion, politics, history or nationalism to divide people and create conflict.

It is something to consider as a possibility, however unlikely or ridiculous it may seem, because there are questions which cannot be easily explained by science, for example: ‘Why is there such long-term and vindictive hate between human beings but not among animals who seem to live obeying the laws of balance and harmony from day to day?’

The Polish film director Krzysztof Kieslowski was very aware of the divisions among people; his early documentaries highlighted them. Kieslowski began to search for what might unite people and he tried in his last films like The Double Life Of Veronique to get people to ponder over the possibility that they may be connected in ways they might not be aware of.

Saint-Exupéry himself wrote in Le Petit Prince: ‘On ne voit bien qu'avec le cœur. L'essentiel est invisible pour les yeux.’ - ‘One sees clearly only with the heart. The essential is invisible to the eyes.’

If you have not yet seen Kieslowski's film, The Double Life Of Veronique, I would heartily recommend it. After some two decades after first watching it, I am still asking questions of myself about it.

I bid you a very good day,
Alexandre FABBRI

Alexandre, thanks so much for the fantastic comment. I havent seen "The Double Life of Veronique", but I'll certainly check it out now.

When people make that argument about animals versus humans, I always wonder how much we really know about animals. I know that dolphins kill porpoises for sport. I know that leopards hold grudges. I'd like to look into it more :)

Good point! My mother used to say to me that elephants and donkeys never forget mistreatment. Also, that animals kept in captivity can behave in ways which are uncharacteristic of their behaviour in the wild. She lived in the high Alps country of France with a very close relationship to farm animals and she hated the mistreatment of animals.

Foxes and rats are described by many today as pests because of the way they scavenge city dustbins for food (and spread disease, etc) but is this because man has permanently altered the balance of affairs in their normal habitat? Are piranhas to be feared? (See http://news.bbc.co.uk/1/hi/sci/tech/6259946.stm)

I wonder sometimes when I hear the English hunting lobby say that city folk don't understand nature in the same way as countrywise farmers, in that foxes must be regularly hunted down otherwise the balance of nature would suffer irreparably. Are these the same people who feed cow's brains to cows as feed and then wonder why Bovine Spongiform Encephalopathy unexpectedly occurs?!

Have a good evening!

i checked on the Little Prince link, and got a 'file not found' message. Copyright woes?

I do love that book, and it keeps coming around to tug at me, fairly regularly.

Not sure, at this point, what the difference between a graphic novel and the original illustrated book might be, and being a purist about some things, not sure I want to know. It does seem redundant. But thank you for reminding me of the book...