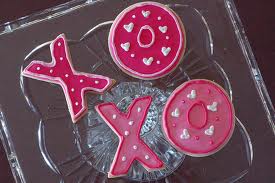 These days I write so many emails and text messages signed off with: Love, Yola xxo that I started to wonder where the X's (and O's) actually come from.  Good old Google gave me the following answer:


"How did X's and O's come to represent kisses? The common custom of placing X's on envelopes, notes and at the bottom of letters to mean kisses dates back to Medieval ages, when a cross was drawn on documents or letters to mean sincerity and honesty. A kiss was then placed upon the cross, by the signer as a display of their of their sworn oath. It was also used in early Christian history as much of a display of the same. Since most of the common people were unable to read or write, the 'X' was placed on documents, and a kiss placed upon it as a show of their sincerity, gradually, as it was used so often, the cross was hurried drawn and often resembled an 'X'. The 'O' is of North American descent, no one really seems to know how it was started. It has been said that when arriving to the US, Jewish immigrants would use an 'O' on documents, not using the sign of the cross, and shop keepers would often use an 'O' when signing documents, in place of an 'X'. Perhaps now it is used as the 'O' being rounded represents arms encircling another, as in an embrace."

You never know what you might be asked during a table quiz!
Posted by Yolanda Barker at 8:15 AM

i like it. I got an x on my hand to signify i was a photographer the other night at a gig. I wonder was that a sign of affection from the burly door man? ;)